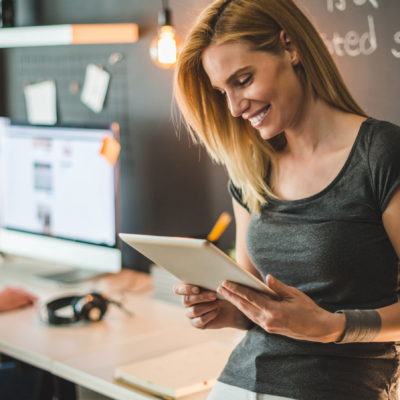 After being laid off as a journalist, Dorie Clark realized that being her own boss was the best way forward. In the next several years of self-employment, she discovered one important trait: willingness to learn.

“There’s an essential mindset for being your own boss,” says Clark, a New York City-based marketing strategy consultant and author of “Reinventing You.” “You have to be the one who brings in the business.” Getting away from an employee mentality is hard, Clark says. Defined tasks are a thing of the past for many, and being your own boss means honing many skills and focusing on the big picture. “Entrepreneurs don’t own a task,” she says. “They own an outcome.”

But the payoff for mastering your own destiny can be big. Income is potentially unlimited. Your free time is highly flexible. And you’re not reliant on one client — your employer — anymore. Not having a paycheck is frequently seen as risky, she says. But entrepreneurs actually are risk mitigators. “As a small business, you’re relying on multiple clients, so you’re better positioned to weather disruption,” she says. In her experience, she adds, “It’s much safer financially.”

Identify a business where you can thrive

Understanding what you’re good at is key, Clark says. That can mean relying on skills you already have, pinpointing your passions and experimenting with different niches. After becoming an entrepreneur, Clark tried political consulting, but she quickly realized she wasn’t getting much traction. More business was coming from nonprofits and other companies, so she focused her efforts accordingly. “Learning that early on [was] critical,” she says.

Social media is a key tool for building a business these days. You can do that by blogging, posting photos on Instagram or Facebook, tweeting or producing a podcast. Clark points to serial entrepreneur Gary Vaynerchuk as an example. He originally started blogging about wine. “And then he realized that he was a terrible writer,” she says, “so he moved to video.” Now he has nearly 800,000 subscribers to his YouTube channel. “If you’re not good at writing, Instagram is a great venue,” Clark says. “And you’re only required to take photos, which nearly anyone can do, such as for wedding planning.”

Understanding what customers need is your main mission, and that means talking with them about what they want. Start with your own network, where you’ll have an audience you already know and who knows you. “Never insist on doing things your way without getting new information,” Clark says. “Get close to customers so you can tweak pricing or service.”

While you can outsource some skills, like bookkeeping, it’s best to learn others yourself. For example, be your own salesperson. “You are the most believable messenger,” Clark says. “There’s something powerful about hearing about a product from the founder.” Developing solid speaking skills is important, too. “You can get lots of mileage out of it,” she says.

Build a network of mentors

Clark recommends building a board of advisors to mentor you over time. “A trusted group of people in your industry is very helpful for alerting you to new trends,” she says. Clark relied on her own network when she started teaching courses on the website Lynda. She asked: How do you market the courses effectively? How do you follow through with students? “You can’t figure this out in a vacuum,” she says. “It can be lonely being an entrepreneur,” she adds. “You have to figure out everything on your own. But building a network makes an enormous difference.”

The article Becoming an Entrepreneur Starts With Changing Your Mindset originally appeared on NerdWallet.