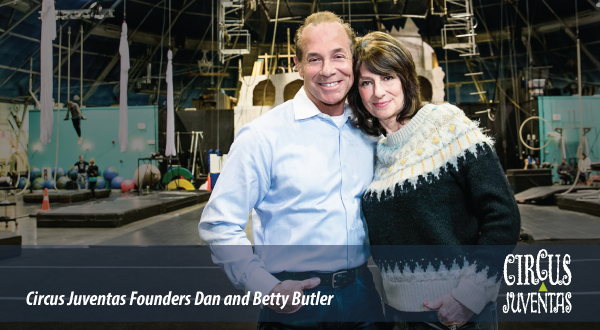 Founded in 1994, Circus Juventas offers year-round circus performance training for all ages under the big top at 1270 Montreal Avenue in St. Paul. The extravagant spring and summer shows are Twin Cities’ favorites.

The year was 1999, and former circus performers Dan and Betty Butler had raised over $1 million to build a new big top for Circus Juventas, the fast-growing youth circus they had started just five years earlier, but recent fundraising efforts had stalled. “We were hundreds of thousands of dollars short and in danger of losing even more in grants if we didn’t secure financing soon,” noted Dan.

The Butlers talked to multiple lenders about financing the big top, including Highland Bank, where they had personal accounts and had recently opened a business checking account.

“From day one, Highland always treated us like we were special — like we had this hugely successful business and were millionaires,” Dan said gratefully. He noted that only Highland believed in them when everything was on the line. “No one stepped forward to help us with a mortgage but Highland Bank. If they hadn’t made us the loan, Circus Juventas may not be here today,” Dan emphasized.

Butler noted that the City of St. Paul also played a key role, providing grants and eventually agreeing to share the mortgage with the bank to cover additional construction costs.

Rick Wall, CEO of Highland Bank, fondly recalled how the bank got involved: “Dan Butler was passionate, persuasive and had a great presence. Dan and Betty’s story was believable, and they had a plan. So we gave them a commercial real estate loan to start building their facility,” said Wall.

Construction on the 21,000 square-foot big top began in the spring of 2000, and was completed in time for the gala grand opening on July 9, 2001. In their expanded space, Circus Juventas offered circus performance training to toddlers, youth and adults, and grew to nearly 500 students almost overnight.

Mary Stoick, Highland Bank Vice President of Business Banking, noted that Highland Bank has deep experience working with non-profits like Circus Juventas, and is able to provide products suited to their specific needs.

“We set them up with a business checking account that pays interest — a for-profit business isn’t eligible for this type of account — and online banking services that allow them to access and monitor their accounts anytime. We also provide cash management services, such as merchant processing services, for tuition payments, ticket sales and more,” she stated.

“It’s been a fun and unique experience from the start,” commented Stoick. “I don’t know many bankers with clients who throw kids on trapezes,” she said with a big smile.

Highland Bank’s creative solutions and tailored services have allowed Dan and Betty Butler to focus their energies on building Circus Juventas into an internationally renowned performing arts organization. Today they are the largest circus performing school in the world at 2,500 students.

Dan Butler is quick to point out that whenever Circus Juventas has needed help, Highland Bank and Mary Stoick have been there. “Mary has always come through for us. She helped us when we were in Europe and our credit card didn’t work, or when I ran out of cash. The city allowed us to not pay rent or interest on their loan for the first five years. When that payment came due, Mary got us a loan right away to cover it. And she set us up with Internet Banking and walked me through how to use that,” he said.

Dan also noted that Stoick has arranged financing for equipment and other ongoing purchases. “We bought a truck for the circus, and she helped with that,” he stated. “And she recently got us an increase on our credit card limit so we can purchase larger volumes of costumes. Before that I often had to pay down the credit card twice a day,” he said chuckling.

Mary Stoick noted that Circus Juventas has always been well managed. She credits Highland Bank’s relationship-based approach with facilitating the organization’s rapid growth. “When your bank knows your story, believes in you, and has been with you from the start, that makes growth easier for the organization, because they’re not worrying about whether their bank is on board,” she said pointedly.

A Family and Community Affair for over 20 years

When asked what’s behind Circus Juventas’ success, the Butlers say there are many factors.

“We’re a community-based performing arts circus,” stated Betty Butler. “There aren’t many organizations out there where you can combine athleticism with performing arts, with both males and females on teams in the spirit of performance instead of competition,” she elaborated.

Dan Butler says parental support is key. “We see about 700 parent volunteer slots filled for the May show. It’s unprecedented. I think parents recognize what a unique place it is,” he stated.

“Also, there are few activities where boys and girls of different ages work together like we do here,” continued Dan. “There’s a lot of mentoring that goes on, and it helps develop the leaders of tomorrow,” he said with a smile.

What’s next for Circus Juventas?

Regarding the circus’s future plans, Dan acknowledges that much has been written about possible expansion or a new, second location, but says no decision has been made. “We are determining the next, best step for us, and Highland Bank will continue to play an important role,” he emphasized.

Mary Stoick concurs. “We are excited to help them write the next chapter in their amazing story,” she said confidently.